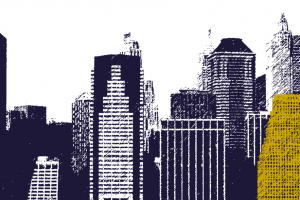 Ely Jacques Kahn is known as one of the fathers of the New York skyline. Starting around 1920 with buildings of classical restraint, he was a master of the fashionable Beaux-Arts style, setback structures of the late Twenties. Playing a significant role in the advent of American modernism and International Style, he designed more than 50 significant edifices in Manhattan, including such landmarks as 2 Park Avenue, the Film Center Building, the Squibb Building and 120 Wall Street.

Ely Jacques Kahn’s father was born in Hohenems, Austria and settled in New York in 1871. Through architecture, design and journalism the family put its stamp on the city’s history, establishing connections between the cultural innovators in Vienna, Paris and New York.

The documentary Hohenems – Manhattan: The Skyscrapers of Ely Jaques Kahn by Ingrid Bertel and Nikolai Dörler retraces EJK’s unique journey from his Jewish family roots in Austria to his studies at the Columbia University School of Architecture in Manhattan and the École des Beaux Arts in Paris and finally to his accomplishments in New York City, which remain stunning to this day.

The film premiere will be introduced by:

Susan Shimer-Rosenthal American Friends of the Jewish Museum in Hohenems

and Lesley Silvester, President of the New York Opera Society

Music
by Marcus Nigsch, composer of the film’s soundtrack and “Modus Mathematicus”
by Gisle Kverndokk & Aksel-Otto Bull. Excerpt from “Letters from Ruth”